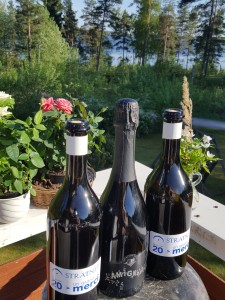 Stratnet Sàrl, a Geneva-based network of strategy advisors, had its 20th birthday on June 1, 2018.
For me this means a lot, because I founded Stratnet and have managed it from the very beginning.
20 th anniversary gives good cause for some reflection.

Thinking businesswise, is tenure of 20 years much for a micro-firm? It is if we look at some
statistics. In 2013 Forbes-magazine published a widely quoted study stating that 80 per cent of start-
ups fail during the first 18 months. It is easy to find many other surveys that support the gloomy
prognosis that 80 to 90 per cent of start-ups fail in their first five years. To make it worse, another
report concludes that if 90 per cent of start-ups do not fail totally within five years they walk
wounded in the Valley of Death. This sounds harsh.

Should we believe in or even care about this minor-tuned statistics? Is it fact or myth? It is a
fact that infancy death rate of start-ups is high. However, we should not forget that there are
successful business closures as well. These are planned exit strategies when owners sell a viable
business, retire from the work force or simply close their business without debt. “Successful failing”
exists in real life, too.

One gets even more confused when looking at survival rates instead of failure rates. USA
offers best possible lessons for comparing failure and survival rates. In the United States 99,9 per
cent of all firms are small businesses. They represent 48 per cent of private sector employees and
one third of known export value. Using this database U.S. Bureau of Labor Statistics informs that
80 per cent of businesses with employees survive their first and about 50 per cent survive their fifth
year in business. In addition, 30 per cent survive even their 10 th year in business.

Building on the above, Stratnet’s 20 years in professional services business looks a decent life
span for a start-up. How much does it matter?

Is longevity important goal for a business at all? 20 years is next to nothing when compared with the oldest firms in the world. The majority of the oldest companies are located in Japan. Since Japan is a country with a long-running culture and economy, this isn’t that surprising. According to Oldest.Org world’s three oldest business companies still running are Kongo Gumi (est. in 578) and Genda Shigyo Paper (est. in 771) in Japan, and Staffelter Hof Winery in Germany (est. in 862). There are some 20 companies around the world that have been running for over 1000 years.

Today, short-termism erodes longevity, especially in the western world. For reason Chinese Jack Ma, Founder of Alibaba, impressed audience in Davos Forum when he told that best Asian entrepreneurs think in terms of 100, even 300 years ahead.

Seminal work by James Collins opens a different avenue for rethinking longevity. One of his main thrusts is that firms that live longest have an essential element in mission, which goes far beyond profit maximization. While relatively healthy economic base is an important pre-condition for running any business, there are several more important elements that build a robust identity.

Identities of founders, owners or entrepreneurs and their companies merge. This integration gives solid performance power. Combining academic knowledge (A), business practice (B) and renewal insights of consulting (C) has been the core of almost all of my professional life. The role of Stratnet has been to support this. Consequently, Stratnet is an ABC-network. It is an organization which aims at supporting and boosting strengths of individuals within the network. Key insight is that an organization serves individuals, not vice versa. In contemporary world individuals should not be crammed into narrow job descriptions that dwarf their best competences.

In our networked society organizational boundaries become fluid, or even disappear. Also, it is not organizations but meaningful challenges appeal most talented practitioners and professionals. ABC-networking on stretch-projects can be a rewarding platform for cross-fertilizing and generating innovative ideas. As an ultimate example, exploring “Big Bang” innovations and business models at CERN has been an endless geyser of ideas and inspiration for Stratnet’s ABC-network. As a result, fresh research insights leading to conference papers, books, novel business models and value-generating consulting practices have been created. As an example, CERN played a key role in the development of Parastatal or“In-Between” Business Models (i.e. bridging public and business management logic) as well as in creation of open strategizing concepts.

Pilots in open strategizing reminded Peter Drucker’s wise words: “Results lie outside the organization.” However, the definition of “the outside” is evolving fast with social media and unpredictable developments of artificial-/super-intelligence. In fact, it is better to think and act in terms of impact. In the case of Stratnet, impact implies thrive towards long-term viability of client organizations in collaboration with clients and ABC-partners. The way to do this is launching and executing strategic initiatives, Tiger Pounce Strategies, rather than through template-based strategy processes. For doing this organizations should develop ambidextrous context, i.e. a challenging merger between high-calibre innovation and powerful execution. The reward of being successful in this is true impact, which means that competitive advantages stretch towards viability advantage.
In conclusion, Stratnet’s identity can be characterized as “aiming at viable impact by co-creating innovative strategizing solutions with the power of global ABC-network”.

For individuals as founders or owners a networked organization reveals still another, a completely different, face. The organization is a source of both comfort and joy. It can become a church social worker. This happened when my son of 28 years passed away in a sporting accident. He worked for Stratnet during his studies and was keen on finding a stronger role later. One year after that my wife, a majority owner and key sparring partner, passed away suddenly. In these situations, in dense fog, when there is no road ahead, road must be made by walking. For me Stratnet was a vehicle forcing to walk ahead, to continue working. Work is a decent drug. More than that, it turned out that some clients and network partners expressed enormous empathy and comfort. Humanity gives faith and power in creating viable future.

When rethinking identity of Stratnet, the bottom line is that it has been a facilitator, enabler and source of energy and joy. I have had the privilege of being an outside-insider strategist for numerous clients. This practical experience has been invaluable asset in academic teaching and research. Cases and mini-cases have also offered integral elaborations for books. Social contacts with ABC network partners have been extremely rewarding. Stratnet also creates space for “being”, strategic thinking and reflection. Stratnet with its invaluable human network has a key role in converting stretch visions into an inspirational intellectual and cultural search and exploration. My motto of life is: “Travel and adventure as long as you can.”

Rethinking Identity of a Start-up Firm